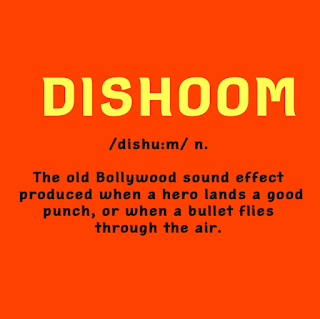 One of the few delights of a visit to the United Kingdom is indulging in the long-held tradition of the English Breakfast. But where should one go to experience this morning culinary ritual of the Brits? The simple answer is pretty much, anywhere. But as with most things, if you want the best, it takes some nosing around. You have to be in the know and God knows things have changed since the last time I was seeking out a breakfast option there. If you’re in England and asked an in-the-know foodie for breakfast recommendations , there’s a good chance that Dishoom would be on their list of recommendations.One thing I do know is that acquiring a book named Dishoom gave me one big pointer as to something I should definitely check out in the British breakfast department should I ever find myself in old London town again. Dishoom!!
Being quite adept at incorporating the traditions of its citizens from all parts of the world into its own dishes, Britain has developed a variety of hybrid, cross-cultural cuisines that exist nowhere else. (The British/Indian dish Kedgeree is the first that comes to mind. I did a story about it that you can read here.) And the process continues today. I am always fascinated to hear rumours of great chefs specializing in various regional cuisines experimenting with ways to merge their techniques with British traditions to make new British classics. And so for a truly British breakfast expedition where should one go to seek out the best and most interesting current developments in its great tradition ? Let’s get a table and order some breakfast and find out shall we?

The name Dishoom comes from the Bollywood sound effect used in fight scenes. A kind of Indian version of Batman’s “POW” in American films, when a punch is landed, the sound effect is said to be ‘kapow!’ In Bollywood films, the same act is accompanied by the onomatopoeic word ‘dishoom!’ As soon as I knew that this was how Dishoom in London got its name, it became an important addition to the wish list.
The reviews I have read tell me this is a number one option for breakfast, especially during the week. It is not overcrowded and you can enjoy the short trip to the outer reaches of the Empire to enjoy a bacon naan roll which seems to have become something of a cult following and surely a very clever signature dish.
English Breakfast Indian style at Dishoom, they tell me and from reading the book, is a great way of engaging with the long history of these cultures, and the food that helps bind them together.
Dishoom proudly acknowledges itself as a ‘Bombay Café in London, to combat the demise of the original Irani Cafés, established by Persian immigrants in India. Dishoom is based on these cafés of the 1960s then Bombay. These elegant, airy spaces used to line the streets, but now they number less than 30. The owners therefore wanted to pay homage to these places that appealed to businessmen, students and workers alike, and bring a different side of India to London’s already Indian-saturated culinary scene. As I have progressed through this book and its stories of these traditional old cafes I have been working my way through the recipes.Starting with breakfast 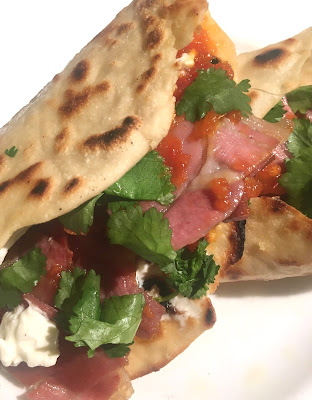 I now make myself a breakfast Lassi every morning which I have really come to enjoy, but the real highlight is the sensational Dishoom signature dish,the inimitable bacon naan roll. I have covered that story separately. This year I haven´t made my traditional batch of marmalade so with Seville oranges still to hand and just having learnt that these fruit stem from India thousands of years ago.I thought it would be appropriate to finish off my Dishoom Breakfast with a round of toast and their Orange and Star Anise Marmalade. The spice lends a beautiful smokiness to this easy to make marmalde, a pleasant surprise in amongst the familiar flavours of sweet orange and bitter rind. As it simmered the kitchen filled with the delicious aromas of star anise and citrus fruit.It was worth making just for that. So that´s breakfast sorted what´s next? If you are a fan of tropical fruits try their winning combination of Pineapple and pink peppercorn jam.Lets face it we are talking all day breakfast option here. 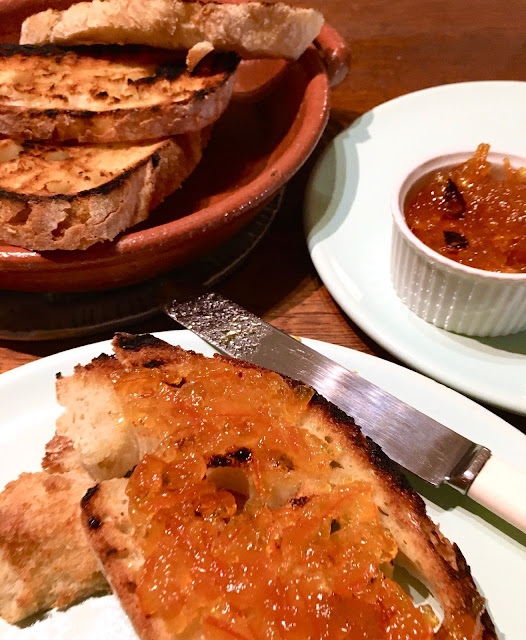 makes about 1 kilo
8 Seville oranges
4 regular juicing oranges
6 star anise
675g sugar
75ml lemon juice
Put a couple of small plates in the fridge to chill;these are for testing the setting point of your marmalade.peel the Seville oranges ( taking some of the white pith with the rind ); you will need 475g.Slice the peel into thin slithers,about 3 cm long.Squeeze the juice from the other oranges into a measuring jug;you will need 675ml juice.If you dont have enough make up with juice from your discarded Seville oranges.Using apestle and mortar, bash the star anise a little so that some of the "points" fall off the "stars." Place the orange peel slivers,675ml orange juice and the star anise in apreserving pan or medium saucepan and top up with water so that the liquid comes 2cm above the peel.You need a pan large enough to accomodate the sugar (when it is added later )with room to boil.Place the pan over a high heat,bring to the boil,thenturn the heat down low and let the orange pieces simmer and soften for 45 minutes,until they are quite tender.Add alittle more water or orange juice if the liquid goes below the level of the orange pieces.Add the sugar and lemon juice,bring back to the boil and simmer until setting point is reached.To test this,take a plate from the fridge and dollop a teaspoonful onto it. Let it sit for a few seconds, then run your finger across the surface;if it ripples and feels gel like the marmalade is ready.If it´s not quite there,simmer for a while longer,and use the second plate to test.Pot into warm sterilised jars while still hot,wiping the lips of the jars to ensure they are clean and then secure the lid. Store the marmalade in a cool dark place and it will keep for up to 6 months.
Email Post